After much messing about with typefaces, I think I’ve narrowed the choice for essay copy down to two contenders: Literata and Lora. Both feel “bookish” and are designed for long-form reading on screens. Both are open source and available as variable fonts as well as static. Version 3 of Literata not only allows us to vary the weight, but also the optical size. The static version has four optical sizes – each in various weights and italic versions.

The caption variant is designed for small sizes (around 7pt), the regular variant for body copy and the deck and display variants are meant for headings. The variable version gives me pretty fine-grained control over this.

Since I’m not sure which of these two typefaces I prefer, I’ve decided to bring both of them into the website and switch them out regularly as I’m working to see if one starts to grow on me.

Although I initially wanted to serve fonts via Google Fonts, I’ve changed my mind. One of my technical principles is as few dependancies as possible, and these are both open source I can host the myself. I was finally tipped into this decision because Google Fonts doesn’t have the latest version of literate available.

I’ve never had to build fonts from source before, but after much yak shaving to update my python install and various home-brew packages I was able to run the three build scripts from the Literata repo. It toook a while to work out what they do, but essentially:

Since the Lora repo already includes TFF files, I just tweaked build-woff.sh a bit and used it to make corresponding woff/woff2 files with the same folder structure as Literata.

After renaming the wolf and woff2 versions of the variable fonts to remove the brackets, I ended up with this in the fonts directory of this site… 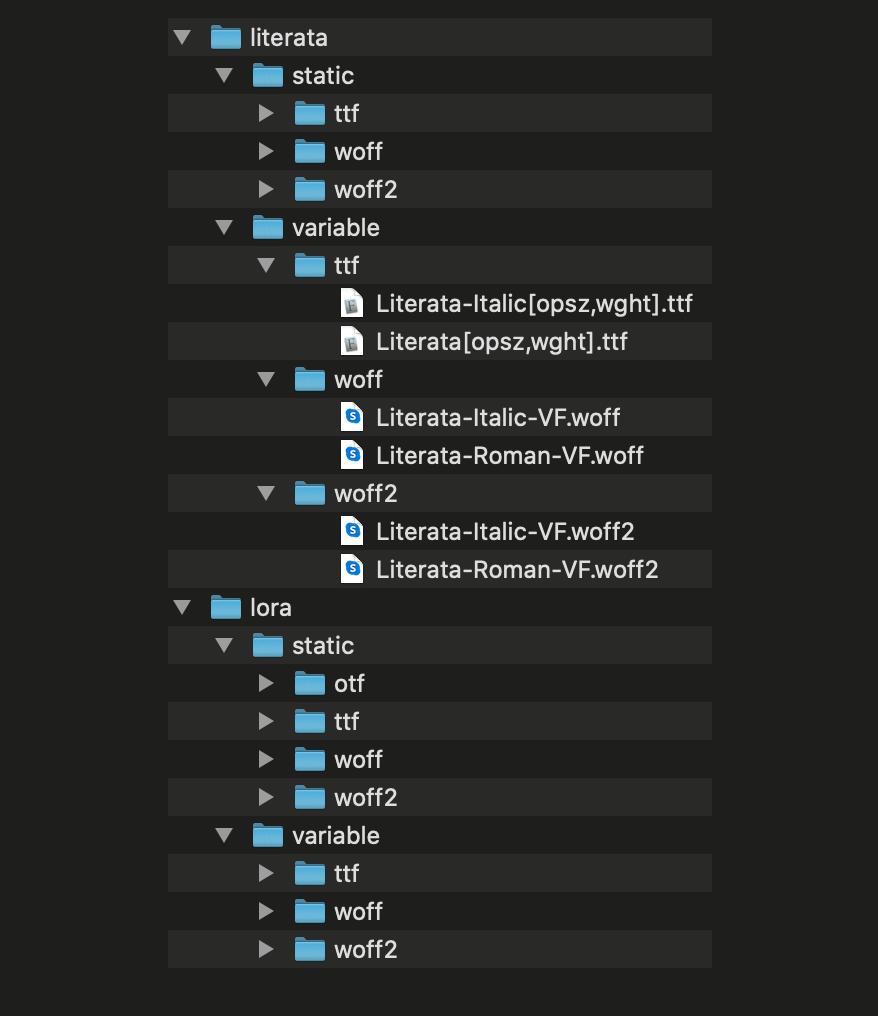 The whole thing comes in at a whopping 28MB, but that’s okay because I’m not actually gonna use most of these in production. I just want them to play with for the moment.

I borrowed the Literata font-face declarations from Jason Pamental’s amazing Moby Dick project and added some similar ones for Lora. I’m pretty sure I’m gonna borrow a lot more from that project over the next few months. They generally follow this format:

It’s been a long time since I actually looked at a @font-face declaration, so if you need a reminder too:

The variable font declarations look much the same, but include two values for font-weight: the minimum and maximum at which it should be used.

Our current CSS sets the font-family for essays using a custom property.

As the design evolves, we’ll definitely end up with a more complex system for this but for now we can just update the variable to use Literata. We can also tell browsers that support variable fonts to load that instead of the static version.

I’d like to provide a more robust fallback stack (see this issue) but for now, we’ll just go to Georgia and TNR.

So where are we at?

I’ll see which of these two feels best as I work on the site over the next few weeks.

One of my goals for this project was my own learning, and after some reflection on that I’ve learned a fair bit during this wanter into web typography…

I’ve also re-learned that it’s easy to get blocked by indecision on a personal project like this. I could have wasted months trying to find the perfect article typeface and still not been happy with it. As with most things, any decision is better than no decision. Especially when it’s reversible.